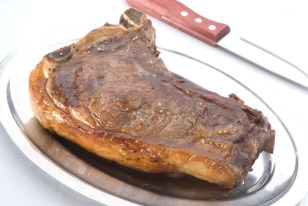 Being poor killed my sister. Well almost. It was actually the steak that did it.

We each had our strategies for fending off hunger: stay with friends, adopt a kindly neighbor, shoplift, or go hungry, especially at the end of the month, when the food stamps ran out. The last week of the month was stay-at-your-friends’-houses-if-you-can week.Besides the end of the month, each season had it’s particular miseries.

You’d think summer, with it’s warmth, would be easier. School was out, which meant no school lunches, and all three of us home, alone. All day… hungry. Mom was at school, or later, at work, and so we roamed, scavenged, the house and the neighborhood for things to eat like three ravenous hyenas.

My sister and I also both had birthdays in the summer, hers in June and mine in July, which meant extra money spent on gifts and a ” birthday dinner.” As fortune would have it, both of our birthdays are toward the end of the month.  But still, my mom made sure that there was no under-cooked, burnt brown rice on birthday night! We were allowed to choose our favorite meal and she nwould buy and prepare it for the family.

Wintertime. You do the math: School lunches removed 15 meals a week x three kids from the too-tight budget. The shorter, colder days meant I could sleep more and was physically less active, so I wasn’t as hungry. However, our house was often more or less the temperature of a refrigerator. When we ran out of heating oil it was weeks, even sometimes a month, before there was enough money to buy more. And  Thanksgiving and Christmas, with their extraordinary expenditures, both fall at the end of the month, in case you hadn’t noticed.

We had steak for dinner the night my sister choked. Maybe it was her birthday dinner. It wouldn’t have been mine, I always asked for “Nanny meat,” a pot roast that my Nana, in her old world thriftiness, served as if it were the most special meal in the world, and therefore, it was.

My sister and I, competitive in all things, also ate competitively. There were no second helpings until you finished your “firsts,” so we ate as fast as we could at every meal. I doubt she was cutting her steak into dainty pieces, mostly we ate with our hands in front of the TV. There was never a lot of chatter or bickering during meals, but still, the sudden silence as the overly large, incompletely chewed hunk of steak blocked her windpipe was noteworthy. With the television blaring in the background, my sister began running around the house, silently, desperately, her face turning red, then purple.

“Mom?  MOM! She’s chocking!!” My mother hit her repeatedly, on the back –  hard –  then held her upside down, she must have been eight?, and whacked her again – desperately – HARD! A greyed, tattered gobbet of meat shot across the room. My sister inhaled, deeply, raggedly, and then began the wailing.

From writing prompt provided in the Edible Memories Retreat at The Inky Path.