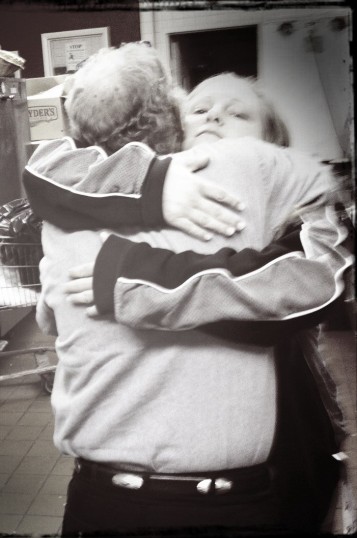 The week after my first chemotherapy treatment I was working again at the front desk, the “Info” desk, at the library. A white haired man that I recognized, a regular, but I didn’t know his name, asked me how I was doing. The first of many firsts, I hesitated, what to say to this casual, polite inquiry? I nearly answered the conventional, “I’m fine,” with my game face smile, but then I realized, he’s a regular. The next time he comes in, I’ll be bald, and he’ll KNOW that I lied, that I put him at a distance. It’s a choice.

“I’ve just had my first chemotherapy treatment, I’m feeling a little rocky,” I told him.

Not a tall man – his name was Ralph, he told me later – he drew himself to his most erect height and declared firmly, “I’m a Stage IV cancer survivor.” He knew, in a way that I only now understand, that I needed to SEE survival, to FEEL it.

“May I offer you a hug?” he asked. And right there, in the middle of the library, I held on to a stranger for dear life.

From a writing prompt provided at the Inky Path Writing Community